I've seen fire, and I've seen rain. But I've only seen but a few times one of the most beautiful of all
atmospheric phenomena... the Aurora Borealis. Thank you for visiting this page. I will be your host
through what I hope you will find a beautiful and interesting journey.

Since Solar Cycle 24 has been gaining momentum, many visitors are coming to
this site who are wondering whether it is possible to see the aurora from their location.
The following information may help. First, determine your magnetic latitude (not the same as your geographic
latitude). Next, you will need to know the current Kp index, which is a measure of geomagnetic activity on a zero
to nine scale. The chart below shows magnetic latitude for selected cities: 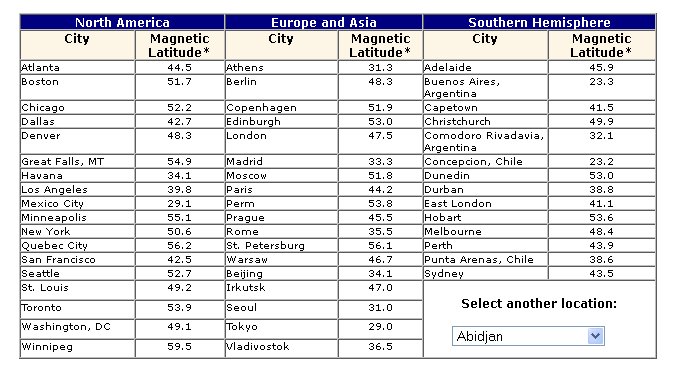 (Chart courtesy of SWPC Tips on Viewing the Aurora.) See link for other cities.

The following table can be used to determine whether your location and the current Kp index
will permit you to see the aurora: (Table courtesy of SWPC Tips on Viewing the Aurora)

If you live in the middle latitudes,
and are interested
in aurora-viewing, I urge you to check out the links
at the bottom of this page. Below, I've included links to free live aurora
web cams located in Jokkmokk and Abisko, Sweden; Fairbanks, Alaska;
and Yellowknife, Canada. In addition to the web cams,
I have listed several aurora notification services you may find useful.

Here are our own 2010 aurora photos. You can also see some photography featuring Alaska.

I have searched the Internet for aurora information, and obtained permission to
use the photos you will find here. If you know of a website or
individual whose work you think we all would enjoy,
please feel free to email me. In the spirit of science and knowledge,
please do not use the photos without permission of their owners.
We are happy to share if you request.

SOLAR MAXIMUM 24 is here! What does this mean for us? Click here
to find out. This article includes links to sources for more information. There is
also an interactive tool where you can find out what the sun was doing the
day you were born.

The following photographs caught my eye for
their exquisite beauty, and for the skill and
patience involved in their creation.  They are
best viewed on their creators' home pages,
which I've linked for your convenience.

Two more of Mr. Hutchinson's photos--
They may look like paintings, but are actually examples
of his photographic skills:

Jan Curtis has one of the most awesome collections
of aurora photos on the Net. Visit his web site
to learn more about the aurora, and to really appreciate
his photographic work.  Here are just a few
examples of his camera artistry:

Two more auroras from Mr. Curtis. The sunset photo
on the left is spectacular:

Click here to see more of
Jan Curtis' work on this web site.

Would you like to see the aurora live? (Please note that the aurora is not visible
in Arctic skies from May through August due to the length of daylight hours.)


You may visit this live Aurora cam based in Sweden.
Please note that Arctic-based aurora cams are generally off-line
during the months of May through August due to the long northern daylight hours.
It has been my joy and delight to gather this information and these wonderful
photos to present to you. My belief has always been that knowledge should be
freely shared. Maintaining my domain and the hosting isn't very expensive, but it
does cost my wallet a bit.
If you have enjoyed the photos and information here, please consider
a small donation to cover the costs of site maintenance and hosting.
Thank you! 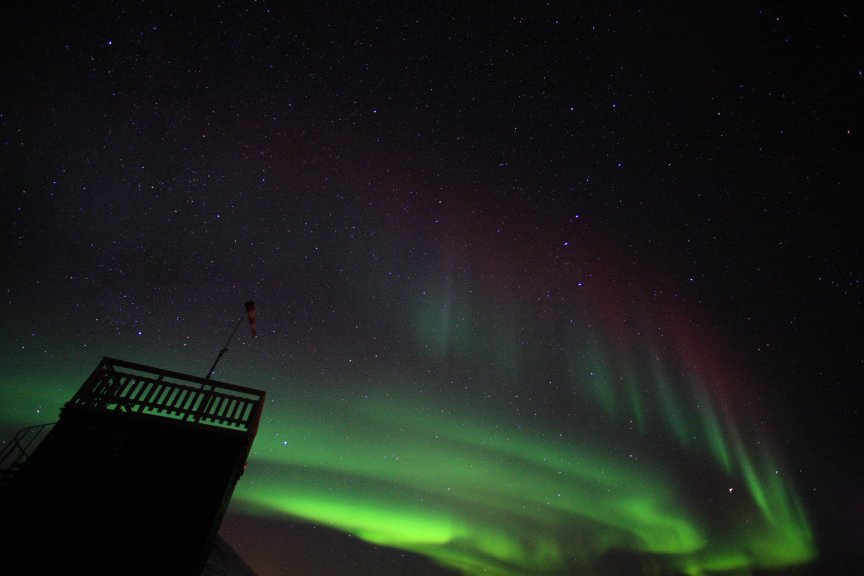 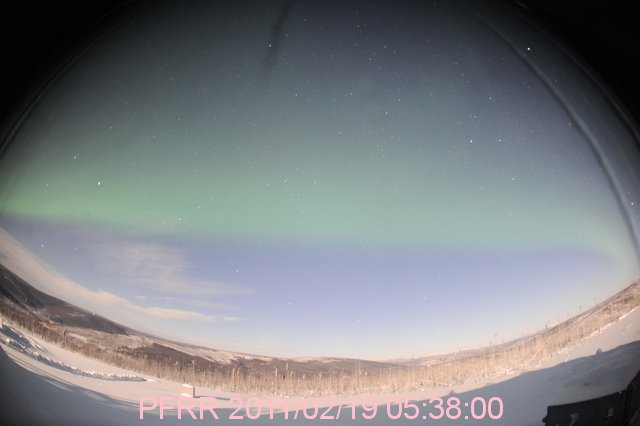 The University of Alaska at Fairbanks also hosts a live aurora cam.

Unfortunately the aurora cameras are out of service from May through August as the nights do not get dark
enough in the Arctic for viewing. In the meantime, please enjoy Ole Salomonsen's beautiful
northern lights video, shown here with his kind permission. 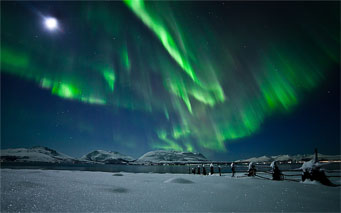 In The Land of the Northern Lights

What IS the aurora? Simply stated (I am not a scientist), it
is caused by the charged particles generated by the sun (the "solar wind")
striking atoms and molecules in the upper reaches of Earth's
atmosphere, and giving them an electrical charge which
causes them to glow.  The effect is similar to our use of neon lights.
For a much better explanation, please visit the links below!
Some of our ancestors believed that the "lights in the sky" were the
highways upon which the souls of the dead traveled to be with
the gods.  Others thought that the ribbons and streamers portended great
events, both evil and good.

Some of us simply find them beautiful.

I've shown you some of the pictures and the science of the northern lights.
Now, I would like to show you some of the poetry.
LeRoy Zimmerman does not only spectacular photography, he also
writes like an angel.  I invite you to visit this page created for him,
on this web site.  The pictures and words are his.  Many of them can
also be found on the Solar Terrestrial Dispatch page. His photographs are panoramas,
so that your eye sees on the computer screen what you would see if you were there in person.

The International Space Station (ISS) crew have a unique view not only of earth, but also of the aurora:


Aurora from Space
Credit: Don Pettit, ISS Expedition 6, NASA
Explanation: From the ground, spectacular auroras seem to dance high above.
But the International Space Station (ISS) orbits at nearly the same height
as many auroras, sometimes passing over them, and sometimes right through
them. Still, the auroral electron and proton streams pose no direct danger
to the ISS. In 2003, ISS Science Officer Don Pettit captured the green aurora,
pictured above in a digitally sharpened image. From orbit, Pettit reported
that changing auroras appeared to crawl around like giant green amoebas. Over
300 kilometers below, the Manicouagan Impact Crater can be seen in northern
Canada, planet Earth.

From: NASA's Astronomy Picture of the Day .

When the solar wind arrives and auroras flare up, a great place to be is Earth orbit. Here is the
view from the International Space Station (ISS), 200 miles high: 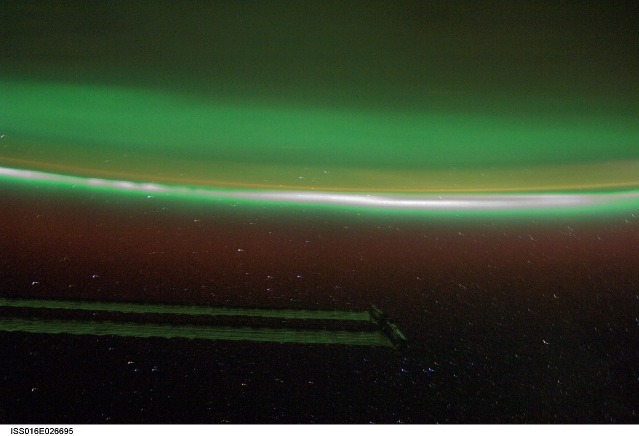 Crewmembers took the picture during a mild geomagnetic storm on Feb. 1st. [2008] At the time, the ISS was orbiting over
the Bay of St. Lawrence and the camera (a Nikon D2Xs) pointing north with a view of Quebec and New Foundland. Although the
auroras appear to be below the ISS, they are in fact at about the same altitude. Indeed, from time to time, the space station
flies right through the Northern Lights--an indescribable experience according to astronauts who have been there.
(Text and photo courtesy of SpaceWeather.com)

The aurora also occurs over the Southern Hemisphere,
where it is called the aurora australis.

Here are two recent (August 2010) photos taken of the southern lights from
Australia's Davis base station in Antarctica: (Above) The green laser lancing into the sky is the station's lidar, the optical
equivalent of a radar, used to study stratospheric clouds. (images and text
courtesy of Space Weather). Our Shuttle astronauts have taken pictures
of the Aurora, from high above the Earth's
atmosphere. Here is one such photo of the southern
aurora:

(above) Notice how you can see the curvature of the Earth, as
the aurora erupts into space above. The Belt of Orion is
visible to the right of the large flare.
Photo courtesy of NASA

(above) Apr. 23, 2010
Location:
South Pole Station, Antarctica
Details:
The sun went down at South Pole Station at 90 degrees S Latitude for 6 months
on March 23 [2010] and we are now seeing aurora. Polar orbiting satellites all
cross at the Poles so the skies are crowded here. A large fraction of photos
capture one or more satellites at this location. The first photo shows South
Pole Telescope (SPT) with an iridium flare and two other satellites. The second
shows a light aurora, South Pole Telescope, the Southern Cross and Alpha
Beta Centauri above. The third photo is an iridium flare passing through the
Southern Cross with Alpha and Beta Centauri to the right. (Canon 7D) J. Dana
Hrubes Winterover, South Pole Telescope Station Science Leader South Pole Station
Antarctica. Photo courtesy of Space Weather

The crew of the International Space Station captured video of the aurora australis
during the geomag storm on 17 September 2011.

Earth is not the only planet with aurorae. Above is a photo of Jupiter's moon Io.
You can see a volcanic eruption to the left, spewing out into space,
and on ther right is an aurora caused by the intense radiation from Jupiter.
Photo was taken by New Horizons spacecraft in 2007.
Courtesy of NASA.

Interested in learning more about aurora?
Visit these enlightening links.

This page is dedicated to two men who I have loved with all my heart --
my father, Don, and my late husband, Rich Owens.
Dad gave me the gifts of curiosity, questioning, and
how to seek the answers.... and most of all.... the
gift of awe. Rich gave me the gift of love -- forever and for
always. I was blessed to seek and to see the aurora with both
of these good men. I am blessed to have been loved by both of them.

This page is also dedicated to.....

The Memory of the Crew of the Space Shuttle
Columbia.

And the Northern Lights in the crystal nights came forth with a mystic gleam.
They danced and they danced the devil-dance over the naked snow;
And soft they rolled like a tide upshoaled with a ceaseless ebb and flow.
They rippled green with a wondrous sheen, they fluttered out like a fan;
They spread with a blaze of rose-pink rays never yet seen of man.
They writhed like a brood of angry snakes, hissing and sulphur pale;
Then swift they changed to a dragon vast, lashing a cloven tail.
-- Robert Service: "The Ballad of the Northern Lights"

If you enjoyed this page, please visit our annoying parrots!

You may want also to visit our other pages:

Raptors! Some of the hawks, eagles, and owls at the World Bird Sanctuary

This web site was authored by Sue Evans. I want to thank
the gentlemen whose photos are featured here
for their gracious permission to use them.
A special thanks goes to Jan Curtis, who
provided scientific critiquing of the
words on these pages.

You are enlightened mind

to visit these pages. Thank you!